Ay-up, ladies and gents: it’s time for a British Slang roll-call! Today we’ll be visiting our neighbors across the pond here at Slang.org to give you a deep dive into the countries most enticing jargon. Remember to always show respect and not to do terrible accents (unless you’re quite smashing at it, mate). Below you’ll find terms and their origins; with these we hope you don’t even bat an eye when speaking with an English-man/woman, and perhaps even impress them with your Anglophile skills. 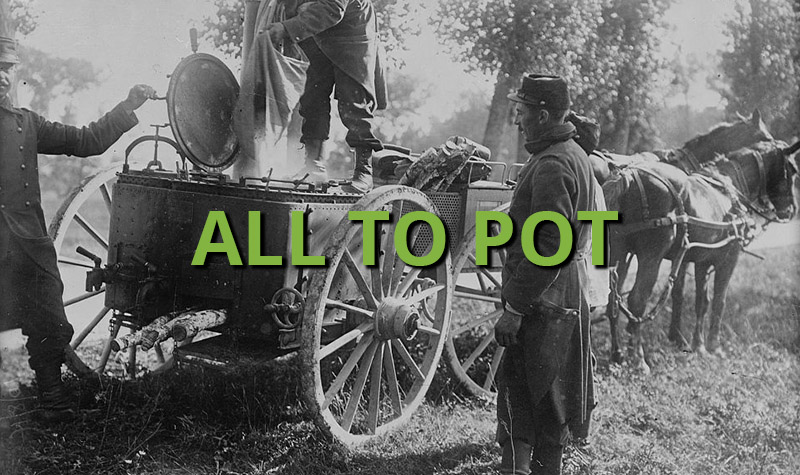 Bungled or ruined; messed up. Based on the phrase “gone to pot”. Long ago, when families would finish a meal, they would save scrape and throw it in the pot to save for later meals, usually stews. This was applied to summarized situations where something was of poor quality or like refuse, thus going to the pot. The phrase can be modified as “all to cock” which is the original slang blended with “cocked up”, which also means shambolic.

Example: “Then everyone left the party and it went all to pot” or “The lift has gone all to cock; maybe we can sell it”. 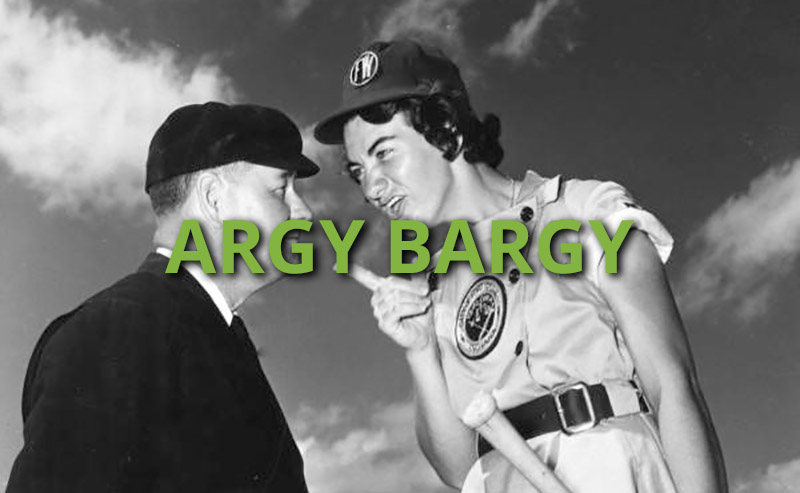 A heated argument or confrontation. The term originates from the nineteenth century as a Scottish phrase. Argle is a modified way to say argue, and over time it became a nonsensical rhyme, which can be quite fun to say aloud.

Example: “Looks like the blokes across the street are having a little bit of an argy bargy.” 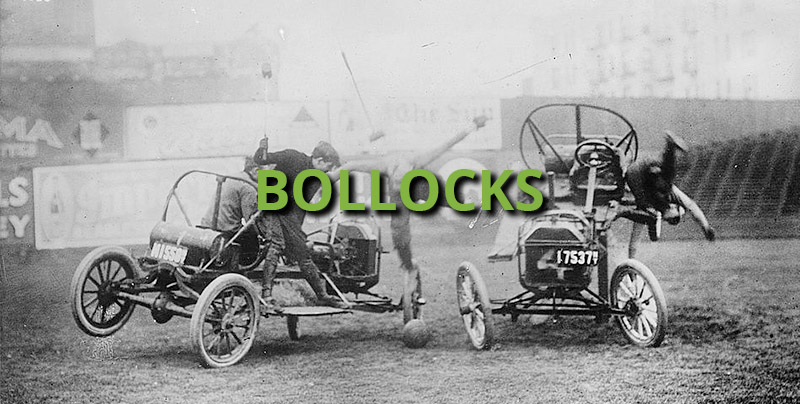 Literally testicles, but most often used to express contempt, frustration, or annoyance. The word can also be a response to someone talking nonsense or to call out someone who is lying. The many uses do not stop there though, as one can also “bollocks it”, which means to screw something up. Further uses include:

On top of the many interpretations, it can be spelled in many ways (bolloxed, bollixed, etc.) and can even be used to express pride or showmanship by appending the word dog (the dog’s bollocks). Clever usage makes this quite the Brit-Army knife of the slang world. 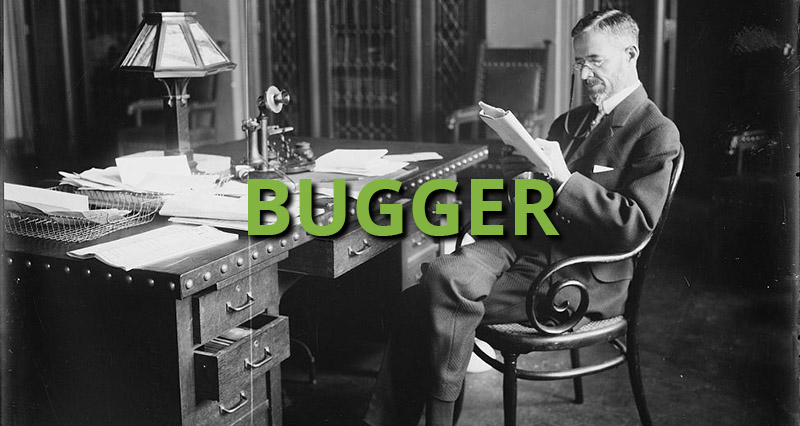 British catch-all with profane connotations, including sodomy. The phrase can be used in a myriad of ways and context is everything. The word can be used affectionately tease someone, but also to berate in a more negative tone. The origins of the word are tied to the 13th century Catholic church running a campaign againsts some alleged sexual deviants, using the word as slander. Luckily the word has become more of an all purpose tool. Below are some examples of different uses of this flexible phrase followed by rough translations to give you an idea of its meaning:

“They’re a bugger for footie, aren’t they?” – “They’re really into soccer, huh?”

A slang aside: A common misconceptions is that King George V’s last words were “Bugger Bognor” (in response to hearing that after he recovered from his illness, they would visit the family resort of Bognor). In actuality his recorded last words were “God damn you.” in response to being given sedative before his doctor intentionally killed him! 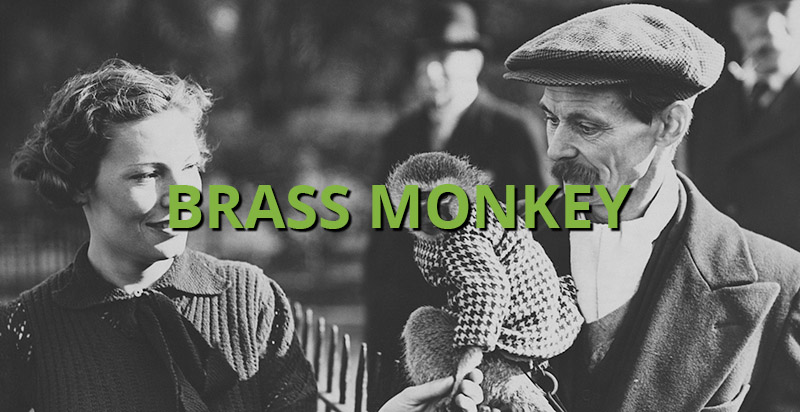 The full phrase is “cold enough to freeze the balls/tail off a brass monkey”, which is to say it is extremely cold. This one has many origin stories, all seeming plausible, none quite verifiable. We do know that the phrase was popularized around the mid-19th century, and most renowned origination with brass monkeys being containers of some kind for a ship’s cannonballs is false.

Example: “Winter is coming, because it’s brass monkeys out here.” 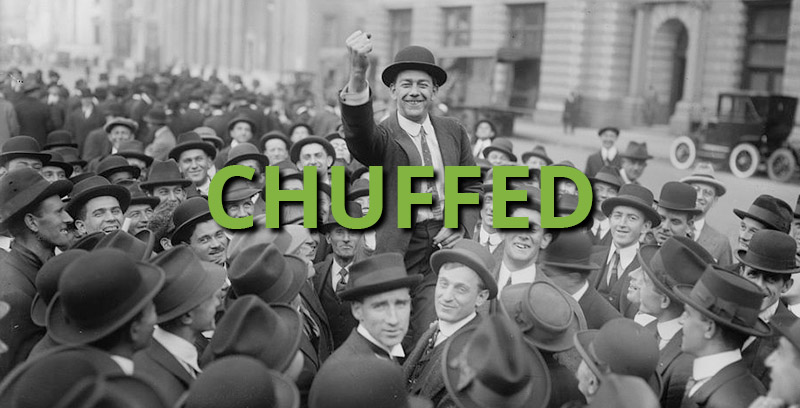 Delighted or very happy; pleased. Often this word is thrown around in a phrase like “chuffed to bits” or “dead chuffed” to further accentuate the pleasure. Again, context can imply a different emotion though, as chuffed can also mean annoyed or displeased. The root chuff is another British catch all whose origin is similar to “puff” and was used to describe the sound of a steam engine. It’s often used as a more tame way to show excitement or dread in front of young ones.

Example: “My boss was all chuffed about my project; looks like a raise is in my future.”

A term for bad or tough luck. This slang has been used since at least the early 19th century and its origin is simple: everyone’s cheese dries out, just like everyone has had some bad luck. Here at Slang.org, we hope to help you from experiencing this bad luck by teaching Brit lingo, so you can look cool and not ask why someone just said “hard cheese” when you broke some awful news.

Example: “Sorry to hear about the break up. Hard cheese, buddy”. 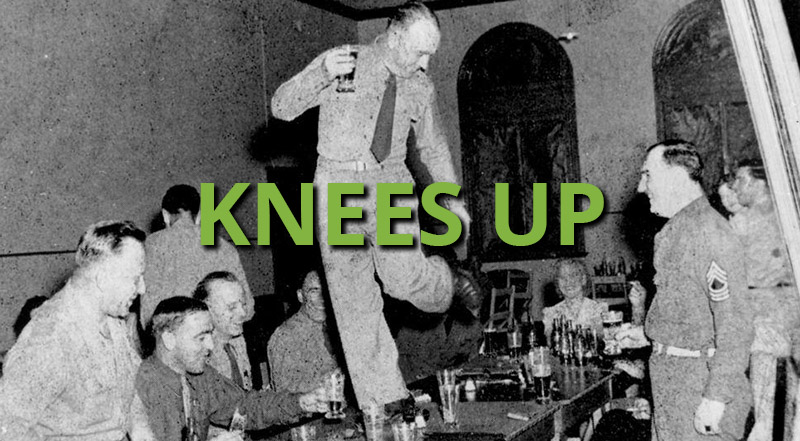 A lively party or dance. The phrase came from a song titled Knees Up, Mother Brown from the early 1900’s. The song was popular in pubs and typically started with the lines:

and typically had a dance associated with it. Definitely a party starter.

Example: “Shall we dance and make this a proper knees up?” 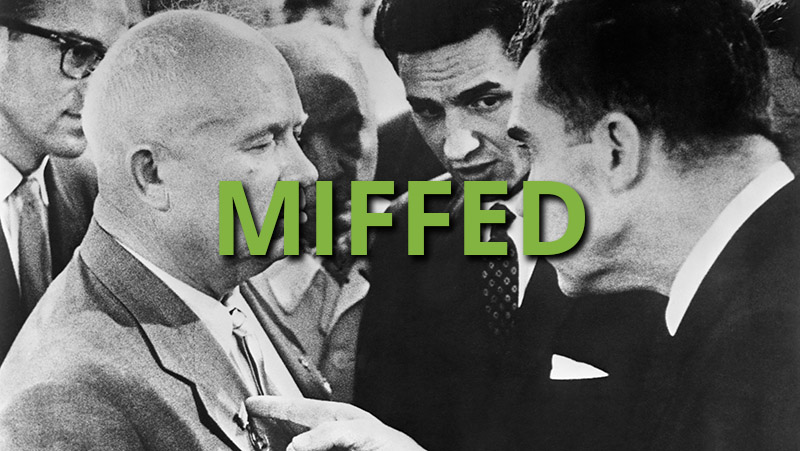 Displeased or disgusted, and sometimes extremely so. Onomatopoeic in origin, the word is related to mff, an exclamation for annoyance. It may also relate to the German word muffen, which means to sulk. Miff can also mean a small fight or quarrel.

Example: “Then they came in and talked right over me. I was unbelievably miffed.” 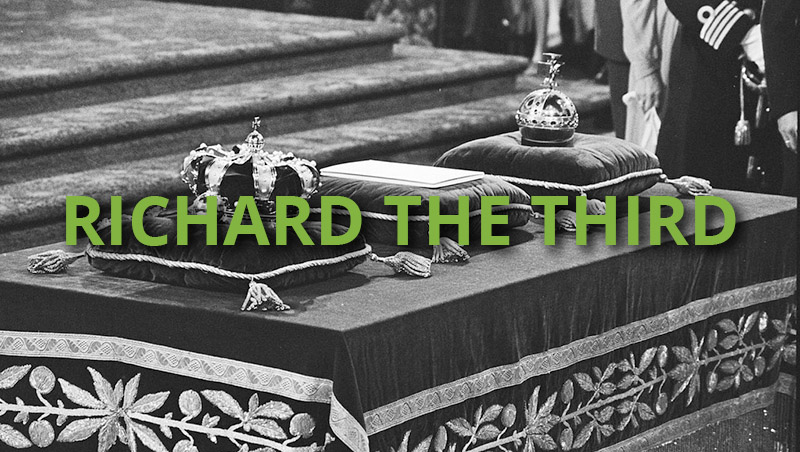 Cockney rhyming slang for turd. The English king has had a Shakespeare played named after him, and in it, he brags of his amorality and quickly rises to power, only to lose it. It is not hard to see how the association of being a piece of… well, you know, came to be.

Example: “Out of the way! Richard the Third coming through!” 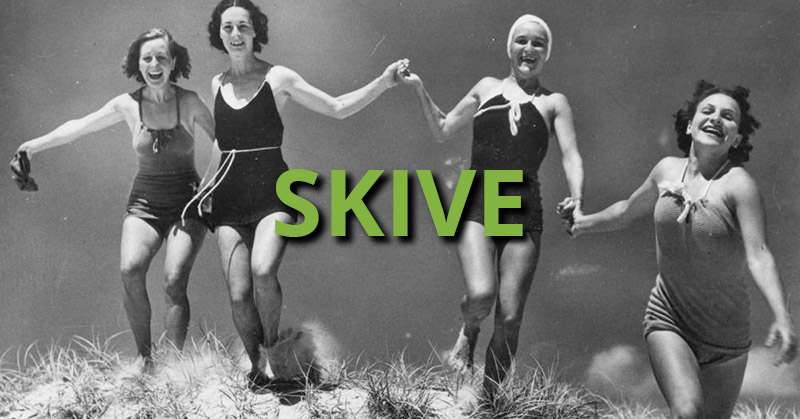 Evade work or school, shirk responsibilities. Often said as “skiving off”. Playing hooky, being truant, or procrastinating is how we say it across the pond. Many relate this word to the verb skive, which is to cut away material like into strips or slices, but the true origin formed during the first World War. The French word esquiver means to slink away. The word was used by troops to describe avoiding a fight and the British army borrowed the short-hand, adapting it to skive. Another British slang for this activity is wag off, which means to waste time while at work.

Example: “How about I skive off during lunch? We could see a movie.” 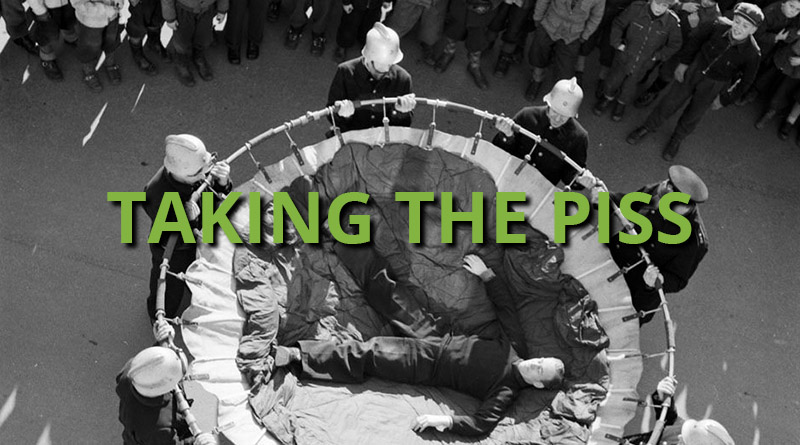 Example: “Oh don’t worry: he’s a tough guy and we were just taking the piss, is all.” 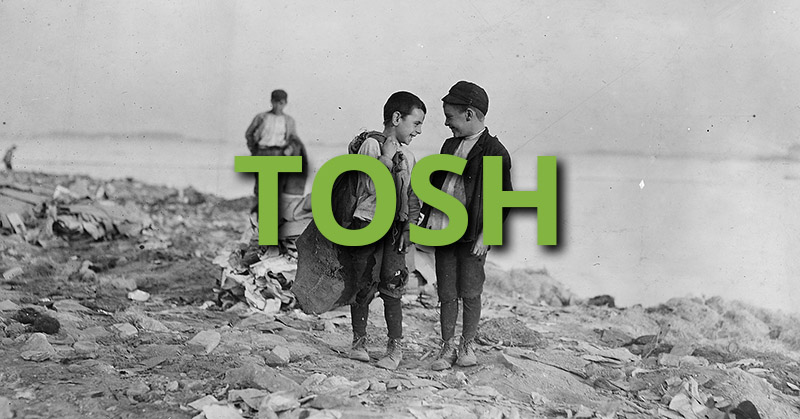 Nonsense or rubbish. It is theorized that this word is a blend of the words trash and bosh (the Turkish word bosh means nonsensical talk). An older use of the word was to describe the act of finding valuables from inside the sewers (“The young chaps went toshing, and made quite the profit”). Scotland uses the word to describe something very different: neat, clean, or tidy. 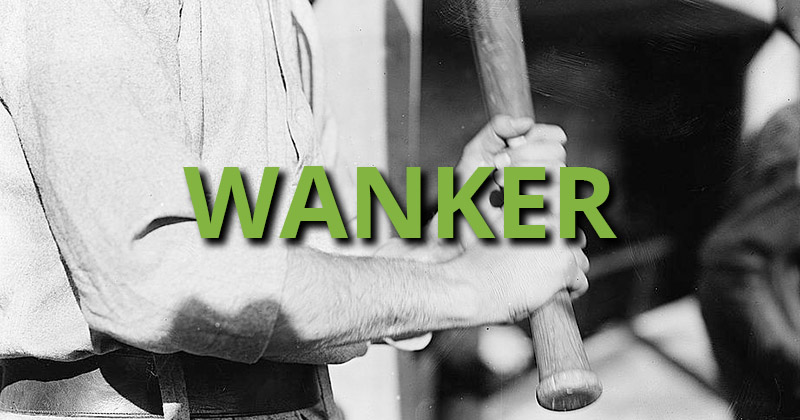 Jerk-off, idiot, annoying, poser or generally no good person. Wanking describes the act of *ahem* self stimulation, so a wanker is literally a masterbator, although the word is rarely used to describe the actual act. In the late 19th century, the term whank was used as a bird call in books (“Whank, whank, whank!” the little bird calls). The relation also extends to the word whang, which is a slang for penis. Regardless of its origin, the word has different levels of severity around the globe: the British public ranked it the fourth most severe pejorative in English, while in Australia the word is widely accepted and used on television.

Example: “Don’t be a wanker! Give me a hand here.”

That does it, my fellow teaboos! Keep checking for updates and articles on Slang.org. No countries short-hand is safe. 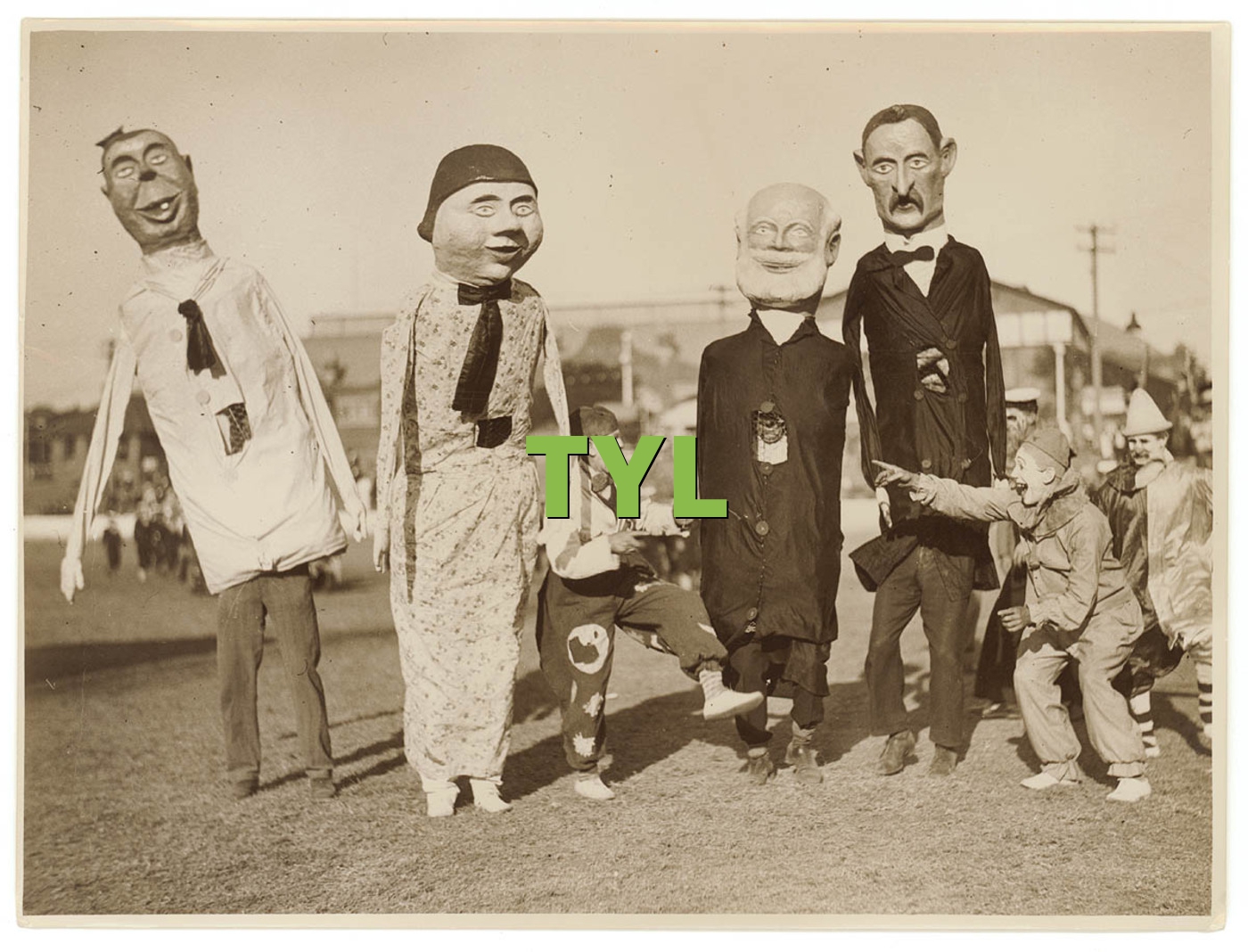 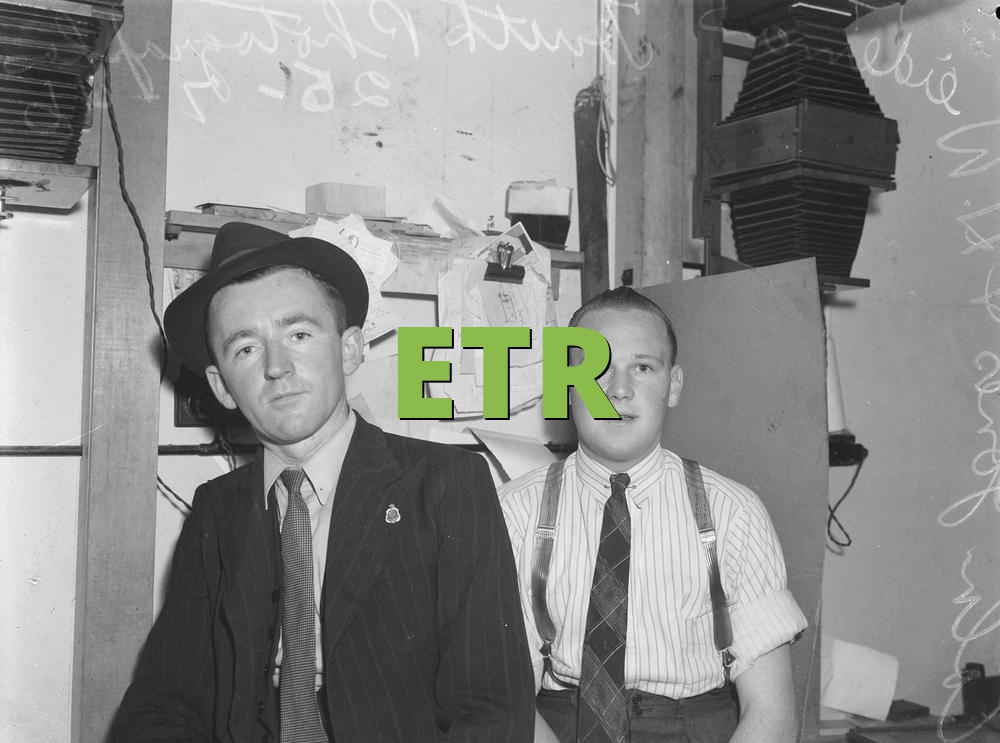